The Ofsted Annual Report 2014/15 has been released and offered some interesting findings for primary schools. Though the findings can be interpreted a few ways, I have offered a summary below.

Early education has never been stronger, but over 113,000 children who would most benefit are not taking up their government-funded places.

As a result, too many of the most disadvantaged children are not ready to start formal schooling. Children from low income backgrounds often do best in the structured, graduate-led environment that schools offer. However, the places offered by schools for two year-olds are disproportionately being taken up by children from more advantaged households.

Primary schools have continued to improve, by tackling complacency and focusing on teaching the basics needed for later learning.

Eighty five per cent of primary schools are now good or outstanding. Primary schools have responded convincingly to the introduction of the requires improvement judgement three years ago, and there are now half as many with that judgement as there were satisfactory schools when it was introduced. The number of local authority areas where fewer than 75% of primary pupils are in schools less than good has halved since last year.

One of the strengths of primary education has been how they have narrowed the gap for the most disadvantaged.

Since 2007, the gap between low-income pupils and their peers has narrowed three times faster at age 11 than at age five. All early years providers, including primary schools, now need to focus much more on working together to reduce the number of children who are not yet ready to learn when they start school.

The lower performance across these regions cannot be fully accounted for by poverty or by differences in school funding. Better-off pupils do less well overall across these regions as do pupils from low-income backgrounds. If standards across the North and Midlands matched the rest of the country, there would be over 160,000 more secondary pupils in good or outstanding schools. 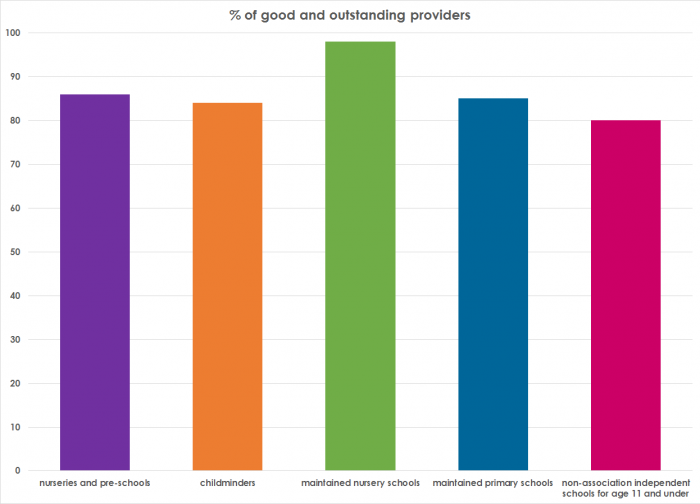 Some schools, particularly in challenging areas, are facing difficulties securing the teachers and leaders they need.

Fewer teachers are being recruited than estimates suggest are needed. There is a competitive market for teachers, and some schools, often those most in need, are less able to attract them. Schools in less attractive areas or that are difficult to commute to, and schools with a lower performance history, are struggling to improve because they do not have the capacity to secure good quality teaching for all their pupils. General FE colleges are also finding it a challenge to recruit the skilled professionals they need, particularly in light of the increased need for teachers of English and mathematics.

The overwhelming majority of schools are successfully promoting British values and preparing young people for life in modern Britain, but inspectors have identified risks to pupils in some schools this year.

In these cases, the presence of extremist views linked to the school environment, or practices that are inconsistent with life in modern Britain, had been allowed to persist. Ofsted will continue to make this a focus next year, particularly in colleges which have been given new duties relating to the Prevent strategy.

Ofsted has introduced significant changes to the way it inspects schools and further education and skills providers from September 2015.

Inspections are consistent and comparable, making the same judgements in the same language across all phases and types of education. New short inspections for good schools and further education and skills providers have been designed to focus on the quality of leadership and the capacity of leaders to drive improvement. 70% of the newly appointed Ofsted Inspectors are serving practitioners.

If you still have questions about the Ofsted Annual Report or want to talk about different options, join me on twitter @Focuseducation1 or for resources and publications related to inspection, view our online store or get in touch with the Focus Education office on 01457 821 818.

Preparing for an Ofsted Inspection

Auditing the Intent, Implementation and Impact of each National Curriculum Subject

Simon has a well-established track record in education, which includes work as a headteacher in several schools, senior Local Authority adviser, lead Ofsted inspector, and CEO/Director of Academies for the Focus Trust. He is also an accredited Myers Briggs (MBTI) practitioner.

High Expectations – What is it?